Dude! We are tied!

It’s quite amazing that there are two Jeremy Lins who play basketball. One Lin is the point guard for the Brooklyn Nets; the other is a 14-year-old who dazzled at BallIsLife’s Jr. All-American Camp. Adidas Hoops hosted the event, and the middle school-aged point guard shook ankles, nailed jumpers and dropped dimes like his NBA-level counterpart.

Lin used various dribble moves to break down defenders and get to the basket. Once there, he finished a couple of double-clutch layups that were impressive for someone of his age.

He’s got time before he can even think about getting the NBA. However, wouldn’t it be a sight if Jeremy Lin matched up against Jeremy Lin? I’d buy a ticket.

If the younger version becomes one of the best in his class, we’d only have to wait five years more. If he doesn’t and goes the route of the Harvard graduate, it’ll be an additional four. I’m going to pray we get to see this, just so the Internet can react to it. 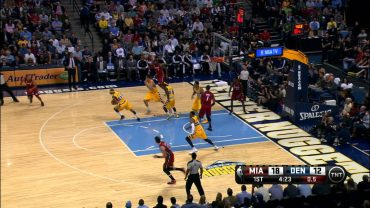